Does inspiration for art come from some sacred place? Am I driven by my art, or is my art driven by me? In the latter, is that simply my ego suggesting that I should take credit for the source of my creation? And does that get in the way of true inspiration?

Can my ego be something positive that encourages creation?

For an artist to endure in spite of public criticism, ego can be a positive. Sometimes criticism makes me feel like my work isn’t good enough. Others times I believe I am the best judge of my own work and I shake off the criticism. In that sense, ego protects.

In the following, my ego gets in the way:

I occasionally am contracted to create designs which require collaboration in the development of the design. There is a back-and-forth process before the final version is decided upon. The design comes together in stages and the contractor not only has input, he also has final decision, which may be very different from mine.

I worked with Sealaska Heritage Institute on a number of occasions where collaboration was imperative, especially when I developed the Sealaska Celebration backdrop in 2004. I worked with an entire team with Perseverance Theater when I was set designer on the “Tlingit Macbeth” also in 2004. 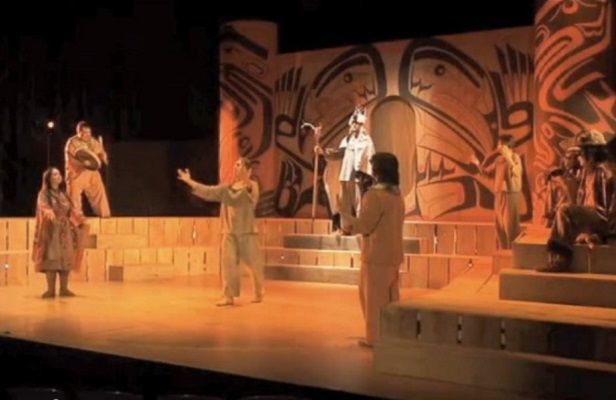 I look at the results of those collaborations, and I’m still amazed at what was produced. If my ego had been too sensitive to criticism or choices different from mine, I might not have been able to participate in the process. I could have stormed off like a brat with hurt feelings. Believe me, there is a temptation to do that and I have to remember I entered a collaborative process by agreement.

Criticism can feel like rejection. There is an entire continuum between fear of rejection and assurance of acceptance. So how can I find that middle ground where I can take risks without so much anxiety about what people think, while avoiding the trap that makes me think I’m a good artist if others like what I do, or the trap of letting success go to my head?

Did that totem carver back in the village long ago have these worries? Or is this an enigma posed by a switch to cash economy, a paradigm shift redefining “art”, and the effects of media on reputation?

When I was a counselor at Bill Brady Healing Center I began to introduce myself as a counselor. It seemed to be part of my identity. It raised my self-importance. Wow! A counselor! When I do this with art, I box myself into a definition of “Artist.” Not just a definition but a stereotype.

My ego may like that stereotype if I need to stand out as special, unique, and exclusive. Could that affect my creative process? Maybe. I might settle for “good enough” or I might also become a perfectionist and never end up with “good enough” – either will keep me stuck. I am not what I do. I am a human being who creates art, sometimes to my satisfaction, sometimes not.

I’ve used the stereotype to excuse the associated behaviors. When I defined myself as a poet I excused my destructive drinking as “what writers/artists do.” That and other eccentric behaviors. I am a human being who makes choices based on ideals, not on expectations that conform to stereotype.

I work in within a specific genre of art: Tlingit formline. So do a number of other Native artists. Within that genre, there are even more specific genres defined both by material (glass, fiber, print…) and by the spectrum of “traditionalism.”

It’s exciting to see so many Native artists out there establishing themselves in the art world. There is so much creativity and variety! I look at the glass work Preston Singletary creates and I get inspired! The paintings of Clarissa Rizal make me want to learn new techniques! The carvings of Tommy Joseph and the jewelry of both Nick Galanin and Jerrod Galanin make me want to branch out and learn those arts! Installations such as those of Da-ka-xeen Mehner make me want to do installations!

On the other hand, I might start to see myself lacking, when I compare myself to others. Worse, I can become jealous. I am good at what I do, and there’s always room to improve. I am a human being with limited time on earth, and it’s more useful to be inspired by others rather than feel I need to compete.

I know that my art pieces end up in someone’s home, that’s flattering. I know that some end up in public. That awareness creeps into my design process especially if I know beforehand where the piece is going. If it’s going to be on public view, that might be inhibiting. I will wonder what people think of my work. I will fret. Nevertheless, even that is flattering – that I have been selected. But if I am going to go into my creative state, worry is distracting. Flattery can make me believe I can stay at a plateau. 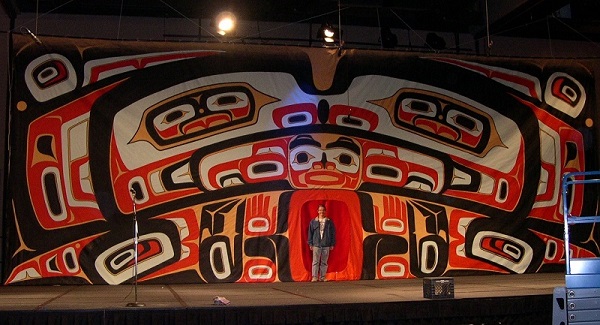 Regarding public recognition, if something I did makes the news I can easily let it go to my head. It will start to feel worth the effort, or worse, it will start to feel like the sum of my effort – to have achieved recognition! Popularity is seductive. It’s good that people admire my art, but if I do it for that admiration alone that’s just my ego being stroked. When I focus on fame, I’m forgetting that I am a human being who gets to explore his cultural identity and his own human soul. When I am humble, I seem to appreciate things more, our culture and history and art, and that I get to be part of it. When I am grandiose, I seem to elevate myself above those things and my art becomes about me.

A long time ago, a totem carver would have been recognized as a totem carver and he would have an important role in the village. Similarly, I like to think that I play a role in our Tlingit culture by producing the work I do. I create clan crest designs for individuals. I teach formline design whenever I get the opportunity, either to help others understand our art, or to engage Natives who want to learn this aspect of our Tlingit culture. I want to believe that my art work has purpose. I want to feel useful.

So what’s the problem with having purpose and usefulness? Nothing. I think it is useful to teach. I think it is wonderful to know that my art tells stories. The problem arises when I think it is my job to dictate to the ones I’m teaching how to do the artwork.

True, I need to lay out the basics, which involves understanding some rules of design. True, I need to explain about respect for clan crests in regard to intellectual property and at’ oow, and I explain about the Indian Arts and Crafts Act and the difference between Indian style art and Indian art. I think art can be used to help others understand and appreciate our culture.

Some of my best students were in the Sitka Fine Arts Camps when students were uninhibited by the rules I explained, and they created such wildly unique works I wanted to steal their ideas! They were more creative when they cast aside some of the things I placed as limitations. It doesn’t pay for me to play dictator.

By the same token, just because I use my artwork and my writing as a voice, that doesn’t make me the spokesperson. I may have political opinions and criticisms. I may tell history that is disturbing, but I speak from my own experience. From my own emotions and memory and point of view.

It’s a slippery slope to be pegged as a spokesperson. If I veer off in that direction, I’m betraying the artwork which has enough meaning being my own personal statement.

Another dangerous direction is when I think I know what someone else, or government or society needs to do. I think I am the fix-it man when all I really have is opinion. I want you to see it my way. I become the benign dictator. Happily, I think I’ve only fallen for this temptation in my naïve youth when I was writing what I thought were political poems and I thought I had all the answers.

I LOVE creating art that evokes thought; that causes one to reevaluate history. I love creating art that is satirical, my own social comment, such as a paddle I painted with an octopus design, and as an afterthought I added a Clorox jug. Come back for future blog “Art as Social Comment”, for the story behind this and other pieces.

I hope my ego stays right-sized so that my artwork continues to be an expression that explores my own humanity, and that it includes beauty, simplicity, and humility.