Warning: Use of undefined constant WOOSQU_PLUS_APPNAME - assumed 'WOOSQU_PLUS_APPNAME' (this will throw an Error in a future version of PHP) in /home/customer/www/tlingitart.com/public_html/wp-content/plugins/woosquare/includes/class-woosquare-plus.php on line 318
 Creating Face Casts for Tlingit Art | Robert Davis Hoffmann
tlingitart@tlingitart.com
0 Items

My interest in casting began when I was working on set design on “Tlingit Macbeth” with Perseverence Theater in 2005, a play written and directed by Anita Maynard-Losh. See on “Tlingit Macbeth” on Vimeo. Roblin Davis was making a cast of Ishmael Hope’s face and I was intrigued.

But I didn’t actually make any casts until some of the props were redesigned for the performance that took place at the Smithsonian National Museum of the American Indian in 2007. Here are some of the casts my wife and I created for the helmets:

For the helmets, I looked for ideas from the helmets that Tommy Joseph carved for his “Rainforest Warriors” exhibit. we built the main form off a construction hardhat, then used plaster to sculpt the various features. Working with Perseverence Theater as set designer really stretched my creativity in unexpected ways. Back to casting faces for masks.

Supplies and Possibilities for Face Casting 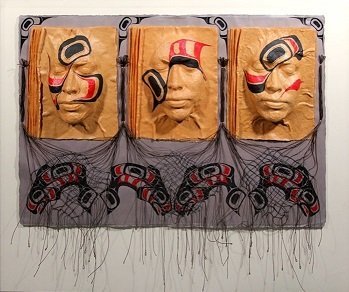 Once I watched the process of casting faces I had to try it myself. Many years ago my sister, Edna Davis-Jackson, was casting handmade paper into masks and incorporating them into mixed media pieces like the one shown here: “Kaa-Oosh and Coho Salmon.” Edna taught me how to cast paper, using organic material from our local environs. So far, I’ve used mostly commercial pulp, mixing in various organic fibers. I use supplies for Smooth-On to create the face mold. Their website has great tutorials for Life Casting.

Face casts are so captivating, and a person can go so many directions with this. I’ve cast faces in a treatment center and also in a college setting; both in which the project was one of self-exploration. Some even decorated the inside of the mask! One thing: make sure the person won’t PANIC when casting their face! I myself don’t get claustrophobic, but sometimes you have to keep the person relaxed with soothing music and such.

A variety of materials can be used to decorate with, depending on what the cast is made of. Sometimes they’re perfect left as they are, especially if you have interesting paper. Here are a couple self-portrait pieces I’m working on, trying to decide where to go with them in terms of embellishement or incorporation into a larger mixed media piece like I did with the first piece below.

Some of My Personal Face Casts, Finished and In-Process

This piece is titled, “I Miss You” is a statement about yearning for something one can’t quite put his finger on. It’s a self-portrait piece with the black diagonal line representing a killer whale dorsal fin (my clan uses the Killer Whale/Seal). The metal buttons in the eyes are intended to give an empty but intense look. The adhesive lettering is intended to give a scrapbook effect. The found pieces below represent a vandalized grave. The wire coil dangling from the mask attaches to nothing, my visual pun. The metal frame is welded steel, meant to suggest a funeral pyre. 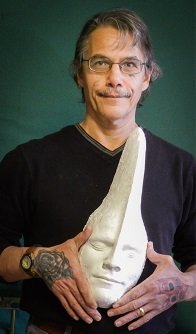