Warning: Use of undefined constant WOOSQU_PLUS_APPNAME - assumed 'WOOSQU_PLUS_APPNAME' (this will throw an Error in a future version of PHP) in /home/customer/www/tlingitart.com/public_html/wp-content/plugins/woosquare/includes/class-woosquare-plus.php on line 318
 Killer Whale Tsaagweidi Painting | Robert Davis Hoffmann
tlingitart@tlingitart.com
0 Items 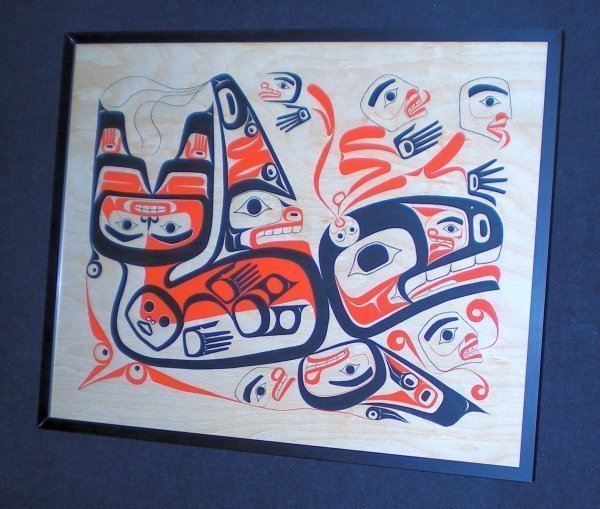 Killer Whale painting I did 10 years ago which the Alaska Native Heritage Center in Anchorage purchased for their collection.

Earlier this year, I began painting a little larger scale. I find myself putting in just as much detail as my smaller paintings though, as you can see in my latest, “Killer Whale / Tsaagweidi.

I’ll just reiterate the description I have in the online store:

This painting has a lot of activity!  It represents a killer whale with a seal in the body; a theme in the Tsaagweidi clan crest. Tsaagweidi is the clan I belong to. The design shows a killer whale breaching, with water spouts represented by humanoid figures, and a face in the blowhole spouting.

Inside the body is a seal, and its smaller spirit figure. All the humanoid creatures surrounding the killer whale are water, waves, spraying and splashing.