Warning: Use of undefined constant WOOSQU_PLUS_APPNAME - assumed 'WOOSQU_PLUS_APPNAME' (this will throw an Error in a future version of PHP) in /home/customer/www/tlingitart.com/public_html/wp-content/plugins/woosquare/includes/class-woosquare-plus.php on line 318
 Salmon Boy | Robert Davis Hoffmann
tlingitart@tlingitart.com
0 Items

The story of Salmon Boy is told as a lesson in proper relationship with the land and its resources, with the Animal Peoples and the sacrifice they make that man should have sustenance. An attitude of utmost respect is demanded, since our lives depended on the land’s bounty.

As this story goes, one young boy and thrown away (or spat out) in disgust a moldy piece of fish. The Tlingit always understood that our respect toward the salmon guaranteed they would return again. The consequence of Salmon Boy’s offensiveness was that he had to become a salmon, thus experiencing necessary sacrifice to become our food.

Salmon boy returned to the river by his village, where he was speared by his father. When his mother cut into him, her knife hit a copper neck ring she immediately recognized as the neck ring made for her son. She wrapped the body in cedar mat, and later the boy emerged as a shaman, who could commune with the Salmon People.

I’ve painted a couple versions of this story over the years. Here they are oldest to most recent: 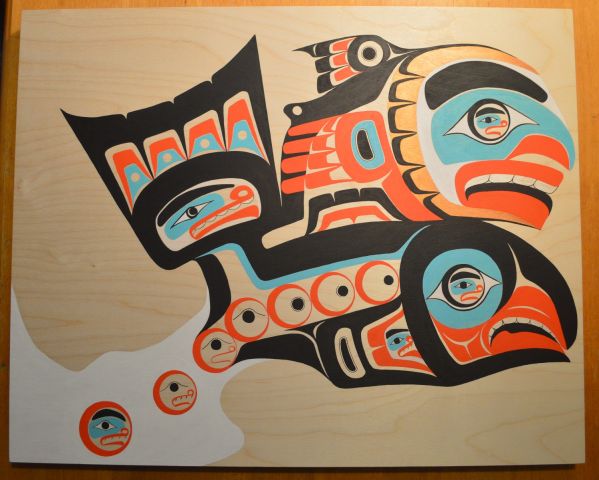 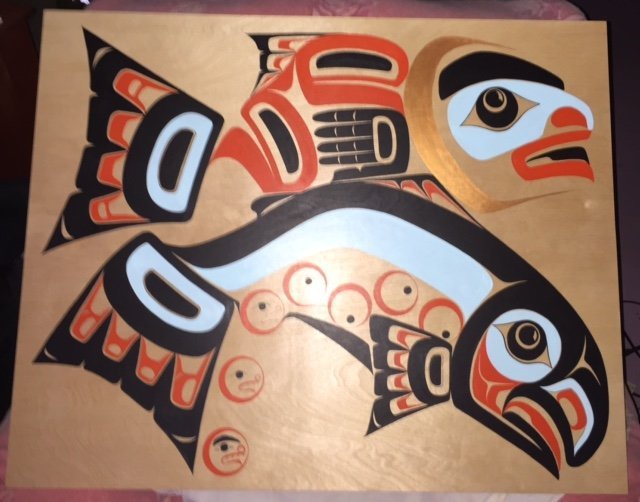 Sealaska Heritage Institute put together a booklet (pdf) of the Tlingit Salmon Boy story, with translation, for children.

Carnegie Museum of Natural History has an online version of the Tlingit Salmon Boy story,  based on stories collected by John R. Swanton and George T. Emmons.